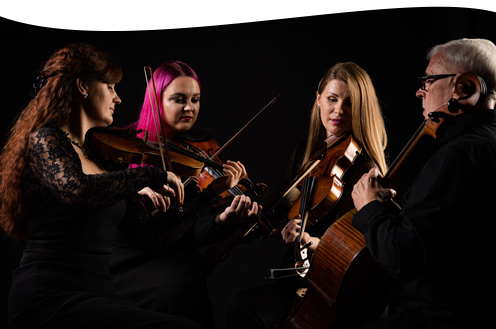 The Kaunas String Quartet began its creative journey in 1981, and it currently is one of the most important classical music ensembles in Lithuania. The City Council has been the Quartet’s patron since 1988. Over 40 years of its existence, the collective hosted over 2700 performances at various venues, festivals in Lithuania, as well as other countries (Finland, Norway, Poland, Russia, Great Britain, Germany, Hungary, Switzerland, Czech Republic, Argentina, Chile, Denmark, Ukraine), and represents the high level of Lithuanian chamber music making.

In its 40 years of being active, the Quartet managed to assemble a repertoire of over 500 works. It regularly performs classical works, pieces from the 19th and 20th centuries, as well as contemporary music. The Kaunas String Quartet has performed a large number of new works by Lithuanian and, in particular, Kaunas composers, with whom the quartet has collaborated over many years. For its role in promoting contemporary music the Kaunas String Quartet was awarded “Tikra muzika” (“The Real Music”) prize of the year (2008), and was honoured with the title of “The Most Memorable Kaunas Creative Collective” (2009). In 2012, for its contribution to Lithuanian culture and art the Kaunas String Quartet was awarded the Prize of the Government of the Republic of Lithuania.

The Kaunas String Quartet is regularly asked to record original music for films and theatrical productions. It has recorded many works for the Lithuanian National Radio and released 14 CDs.